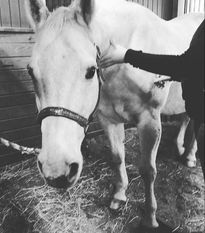 Massage has been used for therapeutic purposes - on both humans and animals - since the very dawn of time. Its beneficial use has been documented in our earliest cultures from the Egyptians... to the Phoenicians... to the Greeks... to the Romans and on to the present time. It is noteworthy, that in the very first books on human and veterinary medicine, entire chapters would be devoted to the use, benefits and implementation of massage therapy.

Later on, as so-called miracle drugs were developed, the medical establishment in concert with the fledgling pharmaceutical industry decided that "old fashion" therapies and treatments - like massage - were no longer needed, nor did they have any meaningful place in a health regimen.
It was only when prescription drugs (some with side effects worse than the condition's symptoms) became too prolific and too expensive did people begin to reconsider some of those therapies discarded in the past. Slowly but surely, in the last quarter of the 20th Century these modalities along with some "newer" Eastern Cultured Therapies began to compete in a very real way for the acceptance and dollars of an increasingly discerning society. That is, society began to realize that they were often getting as much relief and treatment from "alternatives" as from the Pharmacist's drugs and the surgeon's scalpel.

At the same time, people were beginning to understand that if these alternative therapies could help them, they would probably work as well on their pets and the other animals in their care. Thus, in the late 1980's there began to be a significant move toward the use of these alternative therapies on both companion animals and horses involved in racing and show events. Chief among these therapies in actual therapeutic value and cost effectiveness has been massage.

Posted with permission
Written by Paige Cerulli
Published on July 7, 2018 in The American Veterinarian
https://www.americanveterinarian.com/news/the-benefits-of-equine-massage-therapy